Is Solar Power Worth The Cost?

Sunlight is one of the freest energies on earth. Unfortunately, the methods that are used to harvest it can be costly. But that doesn't mean solar power isn't worth the cost. Use this guide and weigh the facts and details for yourself before you decide if solar power is right for you.

One of the biggest concerns with buying a solar array system is does the initial cost outweigh the return on investment (ROI). That answer can be solved by knowing how much sunlight your area receives and what type of system you have installed. Although the initial $5,000 to $10,000 investment price might seem like a big pill to swallow, it's not necessarily going to cost you anything, if you just give it enough time. To get the best return on investment, it's in your best interests to get at least three solar companies to come to your home and give you an estimate on lighting conditions. Typical solar panel systems recoup their ROI somewhere between five and ten years.

One of the first things you should do is see what local, state and federal alternative energy incentives there are available for you as a homeowner. Many local, state and federal programs exist that provide homeowners with grants, loans and rebates for solar power arrays and solar heating systems. Many application services are available online and abound from area to area.

Grid parity is a term used by mathematicians to denote the 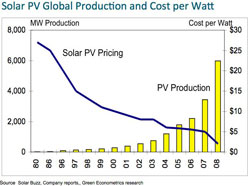 point on a graph where one factor is rising and another factor is sinking, and the two meet together. This point is exactly what is happening to solar panels and carbon based energy. Oil/coal/gas prices are steadily on the rise while solar panel costs are steadily on the decline. But just because solar panels cost more than carbon energy right now, doesn't mean that you should wait until they reach grid parity. Many solar power professionals think that grid parity will be reached within the next few years, making solar power the most cost effective home energy supply, even if it's installed right now. The problem is, using coal, gas and oil energy to power your home is nearly half the price of what it costs to install solar panels. The benefit is that eventually, the solar panel system will pay for itself and each year that oil/coal/gas increases in price, the solar panels will provide exponential energy savings.

It's not just about installing batteries and a few solar panels on the roof. There are many variations of solar power with more innovations coming out each day. Thin solar film is a PV panel that can be attached to existing or new metal roofs, glass panels and siding. This amazing sticky backed solar panel can be purchased for less than $200 per panel and provide electricity to your home for years. Solar evacuated tubes are used to create a hot water solar system even in low light areas like Alaska and Seattle. 3D crystalline materials are being developed that allows the solar panel to capture the rays of the sun at nearly any angle, reducing the need for tilting panel systems.

Use our automated contractor locating service by filling out the form below.