We live in the suburbs of central Connecticut and honestly, it’s a pretty descent place to live. Recently we began having problems with one feisty squirrel that we nicknamed Jerry. A better name for him would have been Krammer, or even Newman, but Jerry has a nice ring to it. 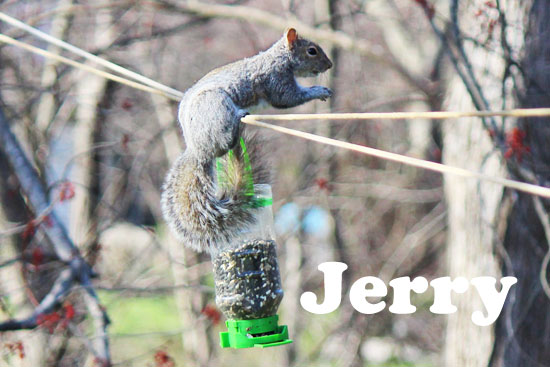 Anyways, our problems with Jerry started when he learned he could scale our clothesline to get to the bird feeder we hang on it.

The clothesline is connected to the exterior wall of our dining room, so when Jerry jumps from the deck onto the clothesline we hear a sound as if someone is trying to break into our house. It’s a springy tugging sound.

The story with the clothesline is that it is original to our home, which is about 60 years old now. The kitchen window faces the backyard, so my wife put a bird feeder on the clothesline since we are not using anyway. This way she could enjoy watching Woodpeckers, Blue Jays, Humming Birds and now Jerry the squirrel directly from the kitchen window.

Sure there was birdwatching but also bear watching as well. One day late last fall we heard a very loud sound coming from our backyard. A large black bear was standing on his two legs with his front legs / arms reaching for the bird feeder which he snagged off the line while making a huge ruckus.

I remember that night clearly because we had a bear eating from our bird feeder which was now on the ground underneath one of his paws while he was trying to pry it open using his jaw and claws.

As this was happening, my wife who is only 5’ tall has our bedroom window open, while she bangs on the aluminum siding while yelling shoo noises. I’m an analytical type of person, so when I see a 400lb bear, I’m thinking if you’re 1 /4 the size of the animal, maybe you shouldn’t be trying to lure his attention your way.

LOL, yes I know some people claim you should make loud noises to frighten bears away, but this bear ran from the bird feeder once when we opened the window, and then shortly after he ran towards the bird feeder again while announcing his insistent bravado by growling and snarling as he ran back to his honey pot.

It is actually when he ran back after growling that my wife began the racquet with the beating of the aluminum siding.

Well, as you can see our clothesline coupled with a bird feeder has brought us endless entertainment, some of it funny, while some of it makes me think twice if I'm taking out the garbage at night.

Mind you a 400lb bear could easily break down your front or back door. That’s what I’m thinking when my petite wife dripping with Napoleon syndrome at the moment could be placing us in danger, especially if the bear had rabies. I personally seen bears at our property at least 10 times, there are YouTube videos of bears at my house on my channel. I’m well aware that black bears typically do not pose any danger, but why try to tempt a 400lbs. wild animal over a $20 bird feeder? The math just didn’t make sense to me. So I'm in my bedroom plotting an escape plan just incase by the rare chance this bear decided to break into our house. To most people that may sound silly, but that's just how my mind works. I rather be prepared for possible outcomes then caught in a situation with only seconds to make a decision.

Speaking of black bears and YouTube, you should check out this video of my wife and I working on cutting off a broken 40’ branch with a rope saw when a bear ran onto our property. The entire moment was captured on our security cameras. And as you can see in the video, we didn’t abandoned ship on the YouTube video. The main reason is because the bear ventured to the back of our yard which is adjoined to my neighbors farm . The area looks very interesting in certain lighting conditions and we just started calling it Narnia. So far we’ve had a bobcat, raccoons, coyotes, screaming foxes, bears, deer, hawks, and once the farmers cow showed up at the entrance to our Narnia.

I remember when we first moved into the house after spending months remodeling it back in 2014, we saw a family of 5 raccoons standing next to each other right in front of the Narnia entrance. It was one of the coolest wildlife sights we’ve seen here.

I think the primary reason we get so much wildlife is because we’re in the valley near 3 mountain tops. Also they probably sense what amazing energy I have so they want to get closer to hangout LOL.

Okay enough about Narnia and back to Jerry the squirrel. Every year we grow a vegetable garden. I love tomato sandwiches, but only with tomatoes you grow on your own. To this day I have never tasted a good tomato out of any grocery store. They all look perfect and red, but the taste when compared to my tomatoes doesn’t even come close. It’s no wonder that a lot of people decline tomatoes on their burgers, if they ever tasted a real tomato their mind will be blown.

Obviously I live in the United States so our produce and food quality is far behind that of what you can find in Europe and other areas of the world. Here chemicals are king as well as corporate profits, health and nutrition when it comes to food production is barely a consideration.

So Jerry can smell our delicious tomatoes probably back in his comfy bed somewhere in Narnia. But what Jerry did this year was go beyond being an ass, yes, Jerry broke into our garden, stole our very first red delicious tomato, then he had the nerve to bring it to our deck and eait it in our face. Mind you, I CAUGHT ALL THIS ON CAMERA! Yes folks, I caught this furry little creature not only stealing from our garden but mocking us by eating it right in front of our dining room window. Simply amazing!