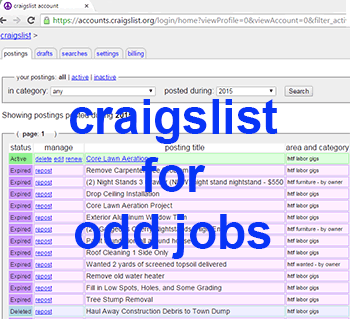 Today I'm going to reveal a few tricks a general contractor would use to hire helpers from Craigslist for odd jobs and maybe even some light construction work. No your eyes are not deceiving you, I did say Craigslist and hiring for construction, curious?

As I write this post, I'm in the middle of remodeling my house and sometimes I run into small projects that I don't want to do myself for whatever reason. That's when I decided to try my luck on Craigslist. As it turns out, you can use Craigslist for something other than a means to get yourself on the Judge Judy show. I've used it several times now successfully for odd jobs around the house and I learned a few important tricks along the way.

Craigslist gets eyeballs no matter what, and some of those eyeballs need to find work. Now I'm not going to lie to you and tell you that every single adventure I had through the Classifieds Ad Giant went without a hitch, in fact if it did, I would have no material for this article. But it's the experiences that went wrong that allowed me to adjust my approach and test my hiring theories on the next set of odd jobs.

So one of the biggest lessons I learned was that asking a simple question on Craigslist and simply replying to those who respond is a total no no. That's right, any shmuck with an internet connection can see your ad and write, "I can do that", in response to your classified ad, and that's what brings forth all the undesirable people.

I asked myself how can I filter out the people who are probably going to be too lazy and too unprofessional to do the job? Then I wrote ads that not only described the work to be done in full detail, but I specifically asked for them to submit a description that described the exact procedure they would use to handle my project along with their bid.

Those that couldn't pay attention to detail or were just too lazy to listen to my instructions were immediately written off, because their response lacked the level of detail I was after and sometimes they didn't even include a bid. And there were always several responses from people who provided a proper bid and described how they would do the project.

I also typically included what I'm willing to pay for such a task, because if you don't do this step, you might just get an email box full of people shooting for the moon. Some of the responses I've gotten through Craigslist were ridiculous, but that's the nature of the beast.

The bottom line is that there are good people out there looking for extra cash for whatever reason, maybe they are a college student, an out of work person, or a contractor looking for the next job. If you're going to use Craigslist, I suggest you try my approach or you can try it your way first, then try it my way the second time around.

Here is a list of some of the ads I posted on Craigslist recently and where the project stands:

Remove Carpenter Bee Problem: Someone wrote in the exact procedure they used at their own house that worked, it wasn't even a bid. I was grateful for the information and will be using it in the fall.

Drop Ceiling Installation: I've received several fair bids and will probably chose one of them as soon as I'm ready to start working on my basement.

Paint foundation around house: I received several good bids, I've contacted an actual contractor but they never responded back. I will revisit this post and possibly repost or go through the responses again and make contact.

Roof Cleaning: Again as with the painting of the foundation, I chose a particular bid because it included the detail I was comfortable with, but the contractor never responded to my voicemail.

Remove old water heater: The previous homeowner covered up an old water heater, steel railing, and an old bike under leaves and brush in the wooded part of my property. I paid only $40 to have it all dug up and removed! I was very happy with that deal as I couldn't wait to get rid of it, even though not many people could notice where it was due to all the leaves and branches on top of it.

Tree Stump Removal: I spoke to a respondee that provided great detail, but the guy said his daughter was about to give birth and that he'll try to do it before she does. Well he called one day and said she gave birth, then I never heard from him again. I actually decided to rent a tree stump grinder and do it myself.

Gutter Cleaning: My rear gutter would overflow during rainstorms, I ended up paying a guy $50 to clean my gutter and was very pleased with his work. I chose him because of how he said he would do the work as well as the price.

Haul Away Construction Debris to Dump: I had some plywood, old doors, and various pieces of lumber looking nice and ugly in the back of my house. I could have paid $400 for a small dumpster, since I don't own a pickup truck to drive to the town dump. So instead I paid $75 to have it hauled away for me by someone on Craigslist, which was awesome!

As you can see from some of the odd jobs I posted on Craigslist they had varied degrees of success. Some projects I put on hold, some I will try again later, while others got completed at a very affordable price. But all of these projects followed my outlined Craigslist Recipe for Success in this post.

And now for those who have never used Craigslist in their life, I'm going to show you the exact procedure you should use to post your first ad. Please remember not to post your phone number, or street address in the ad itself. This method only requires your email address which will not be revealed to the respondee, unless you actually reply to their emailed bid. But posting alone will not identify you or your email as far as I know.  If you're worried about your privacy or security, read through the Craigslist help section for details.

My advice for Posting Ads on Craigslist for Odd Jobs

I used to hire licensed professional contractors for a living and even they had their limitations, although the job of a general contractor is to supervise that the job gets done right. And now that's a responsibility that you're going to have to undertake, because trusting blindly is a mistake.

First I would describe the job at hand in full detail and also provide enough photos for the person on the other end to truly understand what they're estimating. Then ask them to provide a bid through Craigslist email (don't provide contact info in the initial ad) that includes a detailed description of how they will do the work. You will get many responses, some will be ridiculous, many will fail to pay attention to your terms for a detailed explanation, and a few will provide a fair price and a detailed explanation of how they will handle your project. Those are the guys you schedule estimate appointments with in person, or hire if you agree with their terms.

Just keep in mind that Craigslist can be useful for odd jobs, because you can hire anyone from college kids, to actual contractors, to out of work handy people. By following my proven methods, you will at the very least eliminate many bad apples.

To get started go to Craiglist.org

5. Choose "I want to hire someone"

7. Fill out email address only and ensure CL mail relay is selected, that way your personal email address will not be revealed to anyone who sees the ad.

9. For specific location you can fill in your city name or county name. Sometimes those seeing your ad can filter you out if they don't want to work in that city.

10. In the posting "body" provide a detailed description along with the request to have them explain how they will perform the work in detail.

11. Select "Pay" and enter in "Based on description of work and experience".

12. Next you'll have to click "edit images" if you don't have a Craigslist account to add relevant photos that will help the person provide a fair estimate without actually seeing the project themselves.

13. Review and click "Publish". You'll get an email confirming your add with a link to the add. It will go live on Craigslist shortly thereafter.

If you do hire someone that's less knowledgeable because you'll be guiding them, just remember this route will require explicit instruction, because their lack of skill and common sense can lead to unhappy results.

Well good luck with your Craigslist Experiment and let me know on the Proven Helper Facebook Page how it goes. I'm always interested in Craigslist Stories.