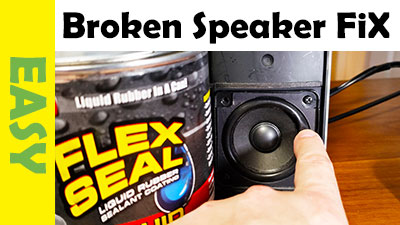 Several years ago my wife convinced me to get the Bose Companion 20 computer speakers I was ogling at BestBuy. I wanted them but they were $200 more than the average $50 computer speakers. However after listening to the amazing clarity and bass response of these Bose speakers, I just had to get them.

A few weeks ago I began hearing a popping sound every once in awhile coming from my right speaker. At first I didn’t think anything of it, but eventually more popping and crackling sounds emitted from the right speaker. At first glance after taking off the speaker grill I could not spot any imperfections with the rubber surround or speaker cone. I was expecting to find a rip or tear somewhere which would explain the distortion I was beginning to hear more and more often.

Well for the next 2 weeks my cousins came over from Sri Lanka so I had no time to really play with the speakers. The only thing I would play out of them for a few hours every morning is some audio commentary from the stock trading room I joined, as well as some audible stock alerts from Trade Ideas and Etrade Pro scanners. Talking and quick beeps here and there did not cause any distortion, it was only from listening to music or really bass heavy YouTube videos that caused the right speaker channel to pop and crackle.

I have to be honest, I was a little sad that my awesome Bose speakers were having problems. The thought of replacing them sucked, because I knew I still had 1 good speaker. So once again I pried off the metal speaker grill and grabbed a flash light. Yup, sure enough I found the source of the problem. The right channel had a ¾” tear in the rubber speaker surround. That’s the little rubber ring that flexes on bass heavy sounds.

It’s at this point that I got really happy because I knew I could fix the problem. My first thought was to use Super Glue, but I was afraid that when the glue dried it would cause the rubber to stiffen and change the sound quality of the speakers which I grew to love over the years. Yes I know some audiophiles think Bose doesn’t compare to higher brands and when it comes to car audio I really have to agree. I’ve had several cars with Bose stereo systems and I was not impressed, my 1995 Acura Legend L and 1995 Mazda Millenia S both had Bose systems and neither of them blew my socks off. However when it comes to home theater and computer speakers, Bose does sound really nice in my opinion. My brother-in-law would not agree with me because he’s knee deep into audiophile land, but I think most people would really like the sound of Bose at home.

Anyways, wow I got off track, sorry. When I realized that the rip in the speaker surround can be glued, I immediately got my camera tripod for my Samsung Galaxy 9+ and began recording the video you see below.

Turns out I still had 5 million gallons of Flex Seal left over from when I had to do an emergency repair on my central ac drain pan that my gutter guy broke. Well Flex Seal is liquid rubber and honestly I cannot think of anything better you can use to fix a speaker with, even if the speaker surround is made out of paper or some type of plastic. In my particular case as seen in the video the rubber was torn on the surround which made Flex Seal a no brainer.

Now it’s been a few days of constant use of my Bose Speakers and I can happily report that the repair is holding up 100%. I cannot detect any sound distortion, popping sounds, or crackling anymore.

Oh yeah, there’s 1 important thing I forgot to mention incase you don’t watch the How-to Guide below, if you rubber sound is ripped like mine was I highly recommend using some type of small paint brush and painting on the Flex Seal liquid rubber on the inside of the rip as well as on the surface of the rip. If you can please watch the tutorial, you’ll also get to hear the speaker before and after the repair. Let me know in the comments on YouTube if you can hear any distortion after the repair was made.

In the video I used a hair drier to speed up the drying time of the rubber glue but it didn’t seem to work that well because it was still tacky to the touch, most likely because that’s what happens when you heat rubber.

An Explosion of Sound

When I plugged all the wires back into the speaker system my computer was playing music at what seemed like full volume. I got freaked out because I thought I ruined my repair, I rushed for the Bose control dial and clicked the power button. No I didn’t leave the speakers on before I plugged all the wires in, but what did happen was that when you do plug the wires in the speaker system just turns on. I happened to have some music playing from the scene in the video where I was demonstrating the distortion on bass notes. Anyway, the explosion of sound scared me, but immediately I realized that I didn’t hear any distortion anymore! I WAS SHOCKED, that quick Flex Seal repair already made such a difference to my used to be broken speaker that even at high volume I couldn’t hear any distoriiton or popping sounds.

Please check out my YouTube video and let me know in the comments what you’re going to try this repair on. Take Care and mark this site in your favorites because I will be posting lots of awesome blogs and how-to guides every month.

P.S. If you’re interested in making some money in the stock market, be sure to bookmark this site and subscribe to my YouTube channel. I just started recording all my day trades because I finally learned how to be profitable after 9 months of studying the stock market every single day.

How To Repair Bose Speakers or Any Speakers